Posted on 4 October, 2014 by candawalley

looking across to St Tropez

We have decided that French weeks have several hours less than ordinary weeks. What other explanation can there be for Saturdays coming round so fast? Last Saturday we visited a new area, partly for house-hunting purposes, and ended up late afternoon on a beach opposite St Tropez. Although it was the end of September, people were eating outside in various villages we went through, and swimming off the beach.

As you can see from the panorama below (you’ll need to click on it to see it better), we discovered yet another charming medieval village nearby, crowned in this case by the remains of a castle from which you can see the bay of St Tropez in the distance.

We have had a string of visitors this week, which meant at one point that English was the dominant language at the supper table rather than French. One of the new arrivals is a long-term one – a German student, Elisa, who Chris is guiding in her research on the ponds which are on one of the plateaus of the estate. It’s very unusual in this part of the world to have such wet areas and these studies should tell us more about their extent and help with their conservation. 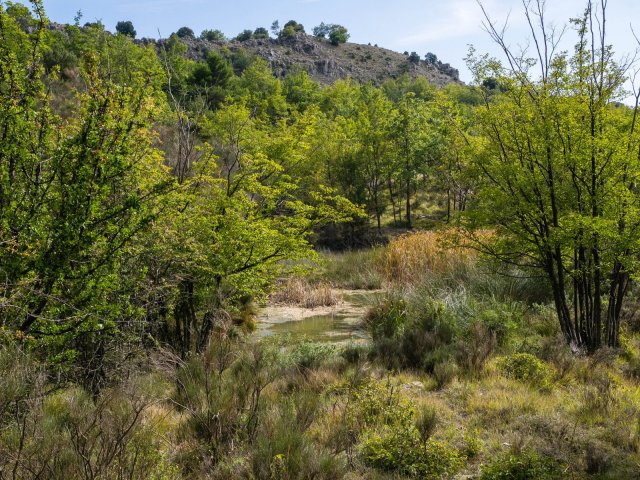 One of the ponds on the Courmettes estate

This week we’ve been for a couple of night walks. We do often go for a walk in the evenings or late afternoon, but these were more memorable. Last Saturday, along a fairly level track, we met a group who were studying moths by putting out lights to attract them. French doesn’t have a specific word like ‘moths’; they are ‘butterflies of the night’. When you see them close up, they may not be as colourful as butterflies, but they do have the most beautiful markings. We talked to one person who told us about the decline in numbers, partly due to bad winters a few years ago. Sadly, this is a pattern which isn’t confined to the Côte d’Azur. 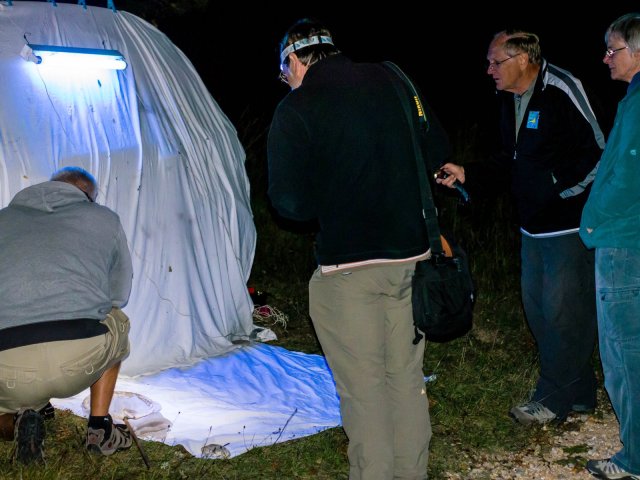 Our other walk started in twilight and ended when it was really dark – although there is a surprising amount of reflected light off the coastal area. With a group of about a dozen people we were hoping to see stags. This is the time of year when the stags roar to fend off rivals and get a good number of females. We’ve been hearing the noise for about a week – it sounds like a giant cow with a sore throat – and the plan was to get along the road and see if we could actually spot any. But the trouble about nature walks is that nature is pretty independent and doesn’t always show up. We think we’ll do a walk of our own this coming week when the moon is fuller and see if we can spot anything.

Finally, we have been looking at a small village called Taradeau as a possible place to buy a house. It’s very near the major railway station at Les Arcs and the “Provençale” motorway, allowing easy access to both Nice and Marseille airports. We have put an offer in on a rather attractive house and are waiting to see whether the owner accepts. We’re not holding our breath, it’s a rather low bid.

Like Loading...
This entry was posted in Courmettes, Var and tagged Côte d’Azur, Courmettes, Taradeau, wildlife. Bookmark the permalink.