Actually, there is a big event at Courmettes this weekend, which we are of course involved in. But as it doesn’t end until late Sunday afternoon, we thought we’d blog on something else instead this week.

Last Friday we decided to go for a meal in the nearby town of Vidauban. It’s within walking distance, so we went, had a good meal, and started our return while it was still just about light. Walking across the old bridge over the river Argens, and along the road out of town lined with magnificent plane trees, we saw flashing lights ahead. An accident? Work on the road? A breakdown? There was a long line of cars ahead.

Coming up to the front of the queue, we found the answer: a trailer attached to a landrover had a sign on the back “ATTENTION TROUPEAU” – watch out for flocks. Spreading from the road over the large unfenced fields to the right was a huge tidal wave of sheep.

We thought that this was where the sheep were going to stay, but no, as we turned right along the road to our house, we found the sheep were going that way too, so we walked with the flock along the road. Talking to one of the shepherds, we found that there were around 3,000 of them and that they were practising the ancient tradition of transhumance. The pastures in the lowlands of Provence where the sheep graze in winter become too dry by the end of May to support them, so they are moved to the higher alpine pastures which keep green even in the summer. 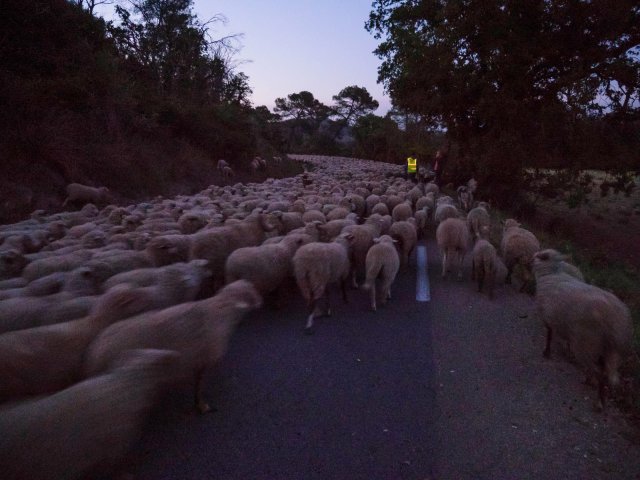 Back on the road. Some of the sheep look blurred as the light was very low. 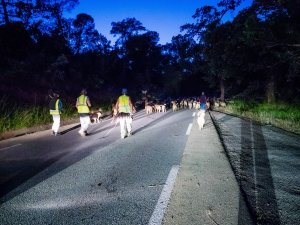 Transhumance has been practised since at least Roman times, but these days the sheep usually go up (and return in early October) by truck. We know that’s true of the flocks at Courmettes. But these shepherds were taking their flocks on foot, over a period of about five days to a week. Sheepdogs helped to keep the flock on course, and the trailer was there for the sheep that couldn’t manage the walk.

The flock stopped in the fields near our house and when we woke up next morning, they had already moved on. They still had three or four days of walking before them. It’s curious how, in this very technological age, some ancient traditions still persist.

The end of the day’s trek at the fields just before our house; the cars are relieved to pass