We have tried in these blogs to maintain a light touch, concentrating on the picturesque and gentle and shunning deep philosophical or theological issues. The circumstances of Friday night’s appalling mass killings in Paris, presumably by Islamic extremists, requires that at least for the moment that such an outlook gets pushed to one side. We presume that a number of you have deliberately clicked on this link wondering if we have anything to say. The fact is there are some deep issues here and because they are probably not going to be addressed in a media that prefers not to deal with matters of faith they are worth saying. 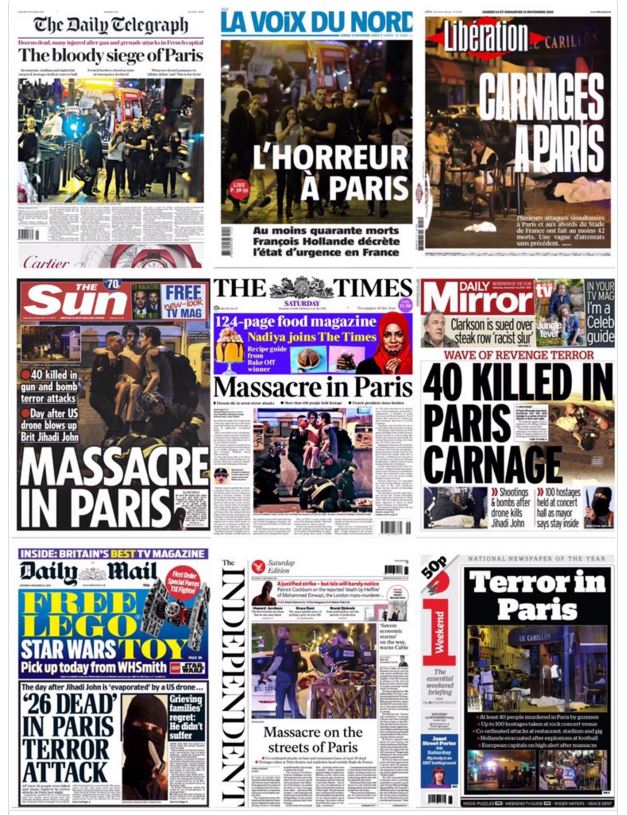 Although we would not claim to be French experts of extraordinary depth, we have done a lot of reading and listening in the eighteen months that we have been here. All countries, like all individuals, have a different history and that history controls how they react. France’s history is particularly special and deeply felt. In thinking about how France will respond to these events, a key element is the deep-rooted and peculiar position on religion. Two events are important to know in this context. In 1789 when the French Revolution overthrew the social order, the Catholic Church was punished for having been on the side of the ruling aristocracy by being specifically excluded from any involvement in the new Republic. This exclusion of religion was heightened in 1905 by the French law on the separation of church and state which is summarised in the principle of Laïcité; this specifically and firmly pushes religion even further from any role in the government of the state. In effect, France has had a Dawkins form of atheism for two centuries. This has both negative and positive aspects.

The negative aspect of this is, it seems to us, that religious faith is neither understood nor taken seriously by most French politicians and intellectuals. The result has been a failure to understand religious motivation and an inability to realise the issues at stake. This is particularly unfortunate when it comes to dealing with or confronting Islam, a religion where government and belief are inextricably linked. Faced with this, as with other matters, secularism is utterly inadequate.

The positive aspect is actually seen in the context of terrorism. Presumably yesterday’s appalling acts were meant to dissuade the French government from its unyielding policy (much firmer than Britain’s) of combating Islamic extremist movements in the Middle East and Africa. Yet precisely because of this background of secularism there can be few states less inclined to give in to religiously-motivated terrorism than France. For which we must all be grateful.

Those of us who pray, should pray not just for the injured and bereaved but also that those in leadership in France respond with both wisdom and courage.