Last week we concentrated on the sailing or more specifically the lack of it, but promised to have something about security. It’s not surprising it was tight after the tragic security debacle at Nice on 14 July.

The maritime police patrolling the edge of the racing area, with a naval ship in the background

The area of sea for the races was off a small stretch of coast just to the east of Toulon’s main harbour: there’s a small park on a slope, then a massive carpark, and along the edge of the coast, some beautiful sandy beaches, with the usual accompaniment of restaurants, snack bars, mini golf and beach volleyball courts. Footpaths lead down into this area and normally cars can access it at either end.

For the America’s Cup however the whole area was surrounded by high metal fencing, leaving access only at the two ends. Every road leading down towards the area was sealed off with massive concrete blocks and large vehicles. Lessons from the Nice lorry attack had clearly been learned. Security at the entrance looked in our bags and ran a hand scanner over us. Inside, armed soldiers were doing patrols.

The leash he is holding is attached to a large dog

There were police, gendarmes, soldiers, dog handlers, overhead helicopters, offshore patrol boats and a small tented village of doctors and nurses etc. However as is now the case in France no one seemed in the slightest bit put out by the fact that we were in an armed camp. Once inside everyone was strolling around, looking at the exhibits in the tented village, or sunbathing on the beaches and taking a swim. It’s the new normal. 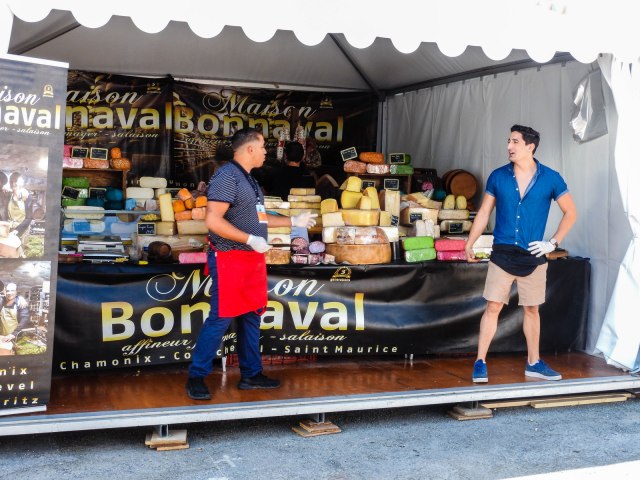 How can you possibly have a big event in France without a cheese stall?

Back in Toulon harbour afterwards, looking through the yachts you could see some of the vessels of the French Navy. Something like 70 percent of the very considerable French fleet is based in Toulon. Somewhere deep in the port and presumably under the highest of security is the massive nuclear-powered aircraft carrier Charles de Gaulle being refitted ready for further action in the eastern Mediterranean.

It was hard to avoid being reminded that beneath the perfect blue sky, that not far away over the horizon, a ugly, unpredictable and contagious conflict is going on.

Echoes of that war of course continue to be heard in France. The ‘Ban the Burkini’ decisions generated a lot of publicity during the silly season of August. What made less publicity was the fact that only a few days ago a group cycling in a suburb in Toulon were abused and physically attacked because the women were wearing shorts.

Neither high security nor aircraft carriers are going to easily sort this conflict out.

Like Loading...
This entry was posted in Var and tagged America's Cup, America's Cup Toulon, security, Toulon. Bookmark the permalink.