Last Sunday (20 November) was the Festival of the New Wine in Taradeau. It’s the big event in the village and in its present form this was its 30th year .

Although, as regular readers know, we normally go to church in Cannes on Sunday we made an exception this week. It wasn’t just the fact that there was the fete, it was the fact that there was a get-together of the Anglican churches in the afternoon in Monaco, so we skipped morning service in order to head there in the afternoon. We did however go to our local Catholic Church, although we respectfully stayed in our pew as the communion was given. There was a relatively young priest who gave a clear and sensible sermon and a Provençal pipe, drum and choir ensemble whose contribution gave the service a sense of a bygone past.

The Provençal ensemble are at the front of the church on the right.

Members of the Illustrious Order and the Brotherhood

We do however have to say that in the service, as elsewhere in the day, there were aspects that puzzled us. So we remain rather unclear about the role of the people dressed in rather fine robes who turned out to be members of La Confréries de L’Esprit du Vin which could be vaguely translated as ‘the Brotherhood of the Spirit of the Vine’. Exactly what they do is a mystery but we have a strong suspicion it involves drinking. (It would be a nice fantasy to think that they raid supermarkets destroying bottles of cheap Chilean plonk but they seemed awfully respectable.) There were also members of the Ordre Illustre des Chevaliers de Méduse which approximates to the Illustrious Order of the Knights of Medusa. Someone somewhere may be able to tell us what the relationship is between the Brotherhood and the Illustrious Order but in the meantime all we can tell you is that they both exist and look awfully fine. 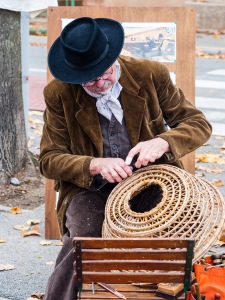 By the time we left the church, the village had become full of people and the square was crowded with vintage tractors, displays of bygone life, and this being France, numerous stalls of wine, cheese and other edibles. Some more typical blue sky and sun would have been nice but at least it didn’t rain.

Eventually, in a slightly disorganised but amiable manner, a procession got underway. It included the Provençal band, the Brotherhood and the Illustrious Order, a cart bearing a reclining robed man dressed as Bacchus and wreathed in vine leaves, the mayor, several horse-drawn carts, at least 30 vintage tractors, a very noisy and monotonous Buddhist drum band (no, we don’t know why either), assorted animals and various other sundries. This made a complete circuit of the village centre, with Bacchus finishing up in the car park of the celebrated Vignerons of Taradeau shop (the wine producers outlet which sells caviar as an aside).

Bacchus in his chariot 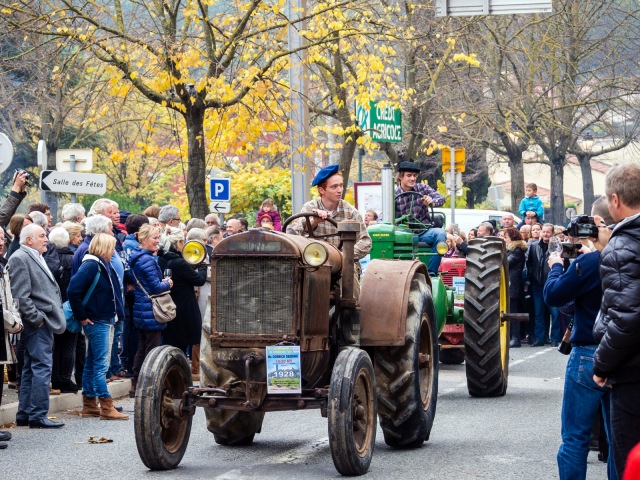 A rather uncomfortable nod to the fact that this was France 2016 was created by the fact that our friendly but no-nonsense municipal police lady was supplemented by three alert looking gendarmes, one of whom cradled an automatic rifle in a very meaningful way.

Outside the Vignerons, the Buddhist drum band having been silenced (to loud cheers of approval), the mayor gave a speech and glasses of the new wine were drunk and pronounced excellent. At which point everybody else tried to sample the new vintage. The consensus of  a couple of people we talked to was that the 2016 rose is excellent but the red is slightly sharp. 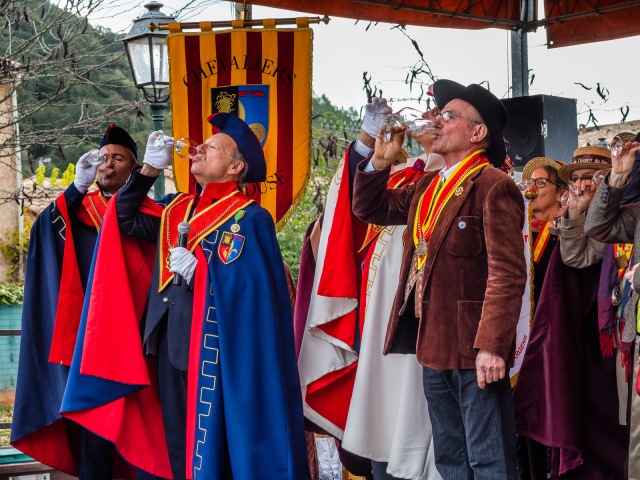 Thus described it may all seem rather parochial and even slightly silly. We didn’t find it so. One thing is that it’s our village and wine is its trade. And besides they have been making wine here for thousands of years. In fact barely 500 metres from the Vignerons lie the ruins of a Roman villa with the remains of structures in which wine was produced and stored. The fact that Bacchus rode in the procession may be an artificial re-creation of the past; but Taradeau being the sort of place it is, it is perfectly possible that it is a tradition that through war, revolution and even acts of terror has continued since the days of the Roman legions and for all we know long before.