Posted on 7 January, 2017 by candawalley

As we’ve noted before, Christmas in France is thankfully neither as long-lived nor as manic as in the UK. The decorations never go up much before mid November, when the supermarkets fill their ‘seasonal’ aisles with toys and chocolate and seem to disappear pretty much on the stroke of New Year. And blessedly the actual festivities don’t close down the country for nearly two weeks as in the UK, with only Christmas and New Year’s days being actual holidays. So for example we were somewhat surprised to get a postal delivery on Monday December 26th (and by the way thanks for all the cards and letters).

In the matter of Christmas decorations here, as in so many other areas of life in France, la Laïcité – the national religion of not having a religion – creeps in and there is a certain embarrassment about nativity scenes. (Our local Mairie had a small one in the office but it probably shouldn’t have had.)  In this absence of Christianity, festive scenes become somewhat bizarre. So our local supermarket had a lavish Christmas display this year which involved the most curious mixture of fact and fantasy. It was a sort of woodland setting with ‘normal’ Christmas firs intermixed with trees with faces which seem to have been derived from Lord of the Rings; all lavishly decorated with tinsel and baubles. Interspersed with them were unicorns and rather twee multi-racial fairies with moving wings. The crowning glory however were all sorts of stuffed animals and birds  (presumably borrowed from hunters) including wild boar, deer, badgers and stoats. In another French touch – the idea of education is valued very highly here – the animals were accompanied by little placards giving you factual information about them. The whole celebration of taxidermy, Tolkien and tinsel was rather striking but its linkage to Christmas distinctly faint. 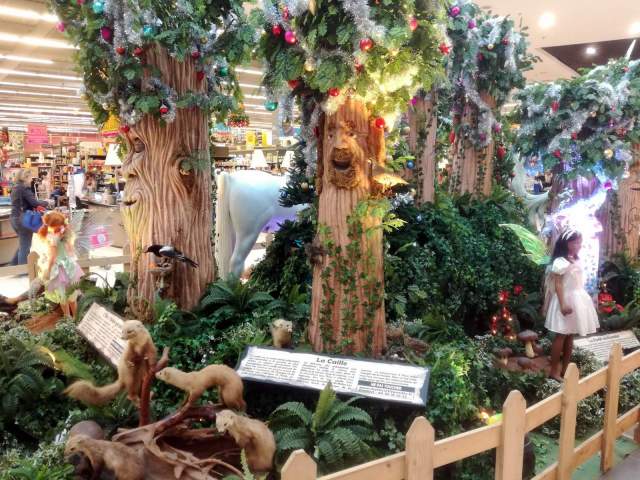 Among our ‘pre-Christmas’ events was one for our local English-language Bible study group, which meets fortnightly at the home of our friends David and Pauline, who also attend Holy Trinity Cannes. We wanted to have a social event where we could invite new people along, sing some well-known carols, and have a brief Christmas reflection. It was the first of its kind and we had about 20 people there. A promising start.

And then there was the A Rocha France Christmas meal, this year at Tourades, the centre near Arles. The get-together was combined with a series of meetings for the Conseil d’Administration (effectively the Board of Trustees) on which Chris has what might be called observer status, and the whole French team. It was good for our French but quite hard work! We all overnighted at Tourades and had a three-course meal at lunchtime the next day. Turkey is not a requirement for a Christmas meal in France so we had a salad for the entrée (on the table in the photo) followed by meat in a rich sauce, and of course by cheese, dessert and chocolates. Given that we had to drive back to Taradeau our wine consumption was distinctly limited! 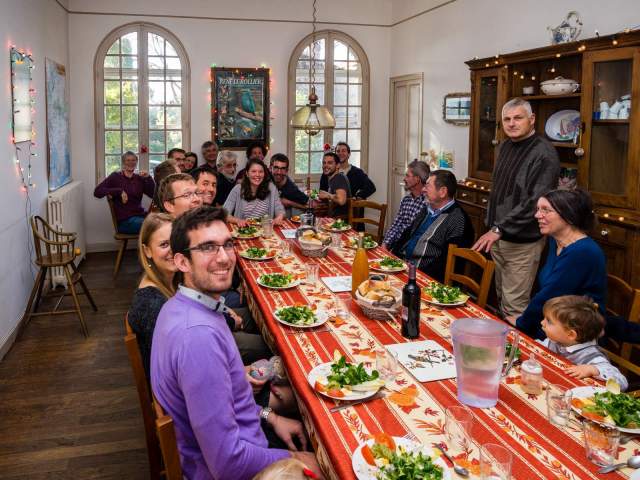 The Sunday before Christmas saw our carol service at Holy Trinity. This year it incorporated the children’s nativity play, a French choir, a short sketch by the local English-language drama group on the message of Micah 5:2–4 as well, of course, as lots of carols. But in best HTC tradition it was a tightly scripted event and came in under ninety minutes. 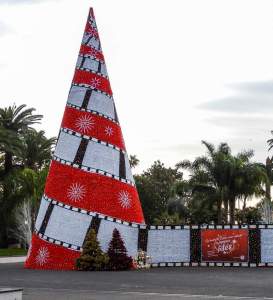 On Christmas Day itself, we arrived in Cannes early enough for our usual stroll along the seafront before going to church. Cannes takes every opportunity of proclaiming its links with the film world and had even turned the imagery of a roll of celluloid film into a Christmas tree. There were also reminders that 2017 will see the 70th anniversary of the Film Festival. And of course Cannes would not be Cannes without its peculiarities. Perhaps most notable was a couple accompanied by five dogs and carrying one, with the walking dogs dressed in seasonal outfits. At least the dogs didn’t turn up at church. 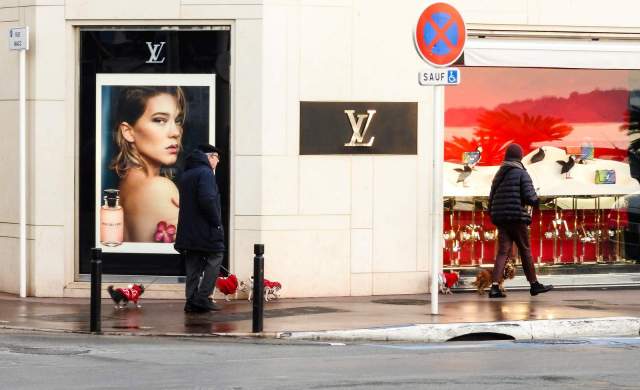 Yes, that is the Yves Saint Laurent shop

Like Loading...
This entry was posted in Uncategorized and tagged A Rocha France, Christmas, Holy Trinity Cannes. Bookmark the permalink.