We will continue with our pictures from the Les Arcs medieval weekend but we’ve had a number of people emailing us asking about the heatwave – la canicule – and how we are doing. The impression one gets from some of the concerned emails is that the British press at least is portraying the Côte d’Azur as some sunburnt, charred and devastated landscape: a sort of Mordor with the heating on.

It’s been tempting to respond along the lines of “yes it’s been terrible; we had to put ice cubes in the rosé, we’ve run out of suntan lotion and it’s been murder trying to use a computer in the swimming pool”. But we do appreciate the concern.

Actually it hasn’t been too bad. Yes the temperature has hit 40°C (104° Fahrenheit) on one or two occasions, but it’s a dry heat which means you don’t sweat. Keep lots of fluid in and don’t do anything silly and it’s fine. It’s not even particularly unprecedented: heatwaves down here are not uncommon although this is the worst for ten years and nowhere near as bad as the annus horribilis of 2003 where France alone saw over 15,000 extra deaths.

There is in fact a fairly well established routine for heatwaves. You go round at 7 o’clock in the morning opening all the windows and doors in the house and let the air that has been cooled overnight get inside. Then a couple of hours later you go round again and shutter up everything, thus trapping the cooler air inside. We also been helped because we have a new extending blind on the balcony which keeps the sun’s rays off the walls of the bedroom.  And we have three air conditioning/heating units downstairs which actually we have rarely used this summer. The bedroom has been just about manageable at night, where temperatures have come close to 30°C, by us opening windows on both sides, shifting air through with the fan and us sleeping under nothing more than a sheet. So we have been managing but then we did survive Beirut in the days when there was no air conditioning, and while the temperatures may have been the same the humidity was far worse.

Our house with the new blind extended . Taken on 14 July, hence the flag!

But things have got very dry. The ground is cracked and has the texture of concrete. All grass everywhere is now a pale parched brown and at midday the landscape looks bleached. A lot of plants are looking distinctly unhappy.

Looking towards our house and Taradeau

Not wanting to use the motorway on Saturday – it’s the season when stretches of the French autoroutes seem to compete for which can have the longest traffic jam – we headed up inland to Lac Sainte Croix hoping that at 500 metres altitude temperatures would be a lot cooler. In fact it was still 40°C there and the air actually felt hot when you breathed it in. Nevertheless, the lake was splendidly refreshing and there was shade among the trees at the edges. 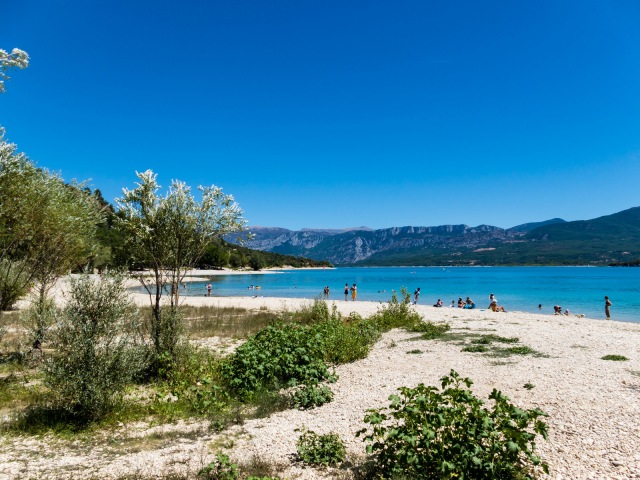 Someone who found it very warm on Sunday was Alison because she preached at Cannes. For those readers who struggle over the phrase “she preached” you could rephrase that along the lines of “she taught under the joint authority of her husband and the Minister”. But she did very well and will doubtless be asked back. 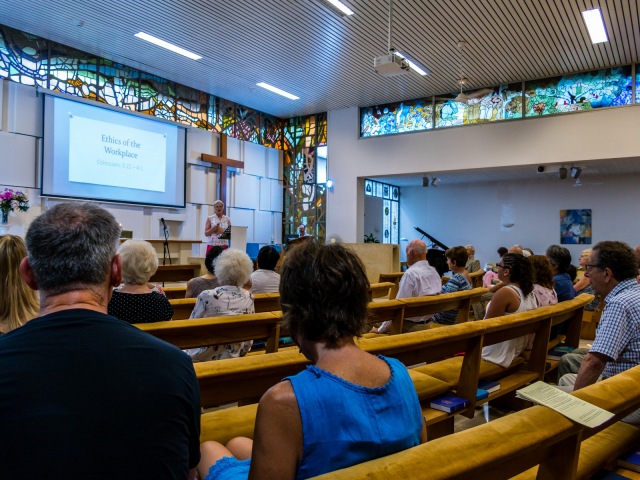 As a closing note, the word canicule is a fun one.  It goes back to Latin for “dog days” and it’s widely assumed that it refers to periods when the temperatures are so high that you see dogs panting away like expiring vacuum cleaners. In fact it’s more subtle. It refers to the period that begins when Sirius – the Dog Star – appears to rise more or less at the same time as the sun. And with various adjustments the “dog days” can range from 3 July to 11 August or from 30 July to 7 September.

On Tuesday however we actually had a minute of heavy rain. Perhaps the dog days are coming to an end.